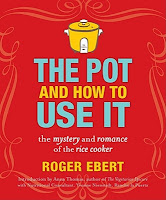 Stumbling home from work today I was greeted by a friend who stops by from time to time, the Amazon box.  Amazon and I are fast friends.  Her one click purchasing allows me to be relieved of the heavy burden of my money.   Since we are, in fact, best friends I help dear Amazon along with a yearly donation so that she will visit in a mere two days -- for free.

The irony of me paying in order to receive something free aside.   Two day shipping is convenient not only for its immediacy, but also that it typically allows my chipmunk memory to recall what it is that I impulsively purchased.   This box, then, was a complete mystery.   Nonetheless, I am always happy to receive a visit from Amazon and eagerly tore back the convenient zipper seal to discover,  The Pot and How To Use It:  The Mystery and Romance of the Rice Cooker by Roger Ebert.   Hell, fucking, ya!

Confusion at this stage for the reader is only natural.   First, why did Amazon give me this book?  That is simple.  I had preordered it many months ago and thus its appearance today was the fulfilment of ancient and powerful prophecy.  Second, why do I need a book on how to cook rice in a rice cooker?  Isn't that pretty much its job?  You are indeed correct.  The Pot though is more than an instruction manual as you will soon find out.   Third, Roger Ebert?  Doesn't he write movies or something?  As you are no doubt far smarter than my hypothetical question, you are well aware the Roger Ebert is actually a movie critic.   Though he did write 1, 2, 3 movies that he himself would likely advise you to steer clear of.  I'm fairly certain being a movie critic in no way removes ones ability to cook.   Besides cooking is only part of the appeal of this fantastic book which I eagerly consumed in a single sitting.

"Take a good look at the label on that microwave oatmeal you've been eating.  [...] It's a dangerous travesty of the healthy food it pretends to be.   But it's high fiber, you say?   Terrific.  You can die of a heart attack during a perfect bowel movement."


Welcome to the joys of reading, The Pot.  Far more than merely a bland collection of recipes, the book is given over instead to a narrative of cooking.  In the introduction, friend and chef, Anna Thomas lovingly berates Ebert's use of bouillon and canned ingredients as shortcuts.  Roger continues the conversational tone ruminating on his nonculinary upbringing but love of food and his Aunt Mary's "just throw in about enough" cooking methods.

He discourages and at times disparages the overly complex.  Saying that any rice cooker that has more than "Cook, Warm, Off" is pointless (or perhaps missing the point). That companies warning to cook nothing but rice in The Pot is merely their cynical attempt to sell you more devices that you don't need.   Before you know it he's talking about his love of oatmeal and soups.  Telling you about carmelizing onions and cooking minotaur.

Halfway through the book and you suddenly realize that you've been reading the recipes the entire time.  Ebert isn't going to give you precise measurements, specific ingredients, or cooking times.   No, The Pot knows when it's done he insists.   Instead he is nudging you forward encouraging you to explore.  He gives you the basic foundations, ensuring you that everything will fine.   Everything will go according to plan because there is no plan.

You can tell that Ebert loves food.  I can understand the passion.  Eating is only part of a meal.  It is the conversation and friendship that makes a meal great.  Despite his inability to eat or perhaps because of it Ebert seems  to truly understand this.

The warmth and humor on display is perhaps best expressed in the latter half of the book where he gives the remaining pages over to the readers of his blog.   Printing comments on cooking with The Pot as well as several dozen user submitted recipes.  It provides further entertainment and inspiration for you to take forward into your own cooking journey.
at 8:16 PM