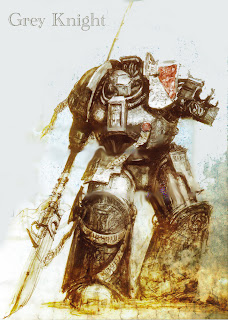 New Grey Knights are here!  I've had a Grey Knight army for sometime now and have occasionally pulled its rumpled 3rd Edition Codex out for a game.   Despite the intertrons bitching I found them to be a fairly viable force, if lacking the depth of modern codexes.  Of course I cheated like a bitch because I only used the most current rules for all their gear.  I've even played them in tournaments that way, without asking, and nobody batted an eye.  Fuck GW and their erratas, Assault Cannons are not Heavy 3 without rending.  I guess, for me, getting a Landraider that "works" isn't really such a big deal.  Mine have always worked, largely because the people I play with aren't assholes.   I love them forever for that.

Nonetheless, I was excited to see what new, exciting, and crazy things the Knights could do so Casey and I duked it out.  I would be trying the new Grey Knights.  He would be trying the, new to him, Space Wolves.  I confess, having seen the Wolves in action I figured my ass was grass.  As it turns out the Grey Knight codex isn't really all that "new" and Casey wasn't kidding when he said his army was out of his normal comfort zone.
My Army
Grandmaster

each squad of grey hunters got a character.

The battlefield was a large central area of 5 craters.  Ramashackle walls were strewn between them breaking up the clear lanes.  Ringed around this area was several ruined buildings.

The second was 12" forward directly in the middle of the table in a crater.

The third was 12" in from my right flank also in the middle of the table in a ruined building.

Deployment - Deke
I deployed first. I combat squadded my psybolt Strikers, placing one unit in the same ruin as the easily claimable objective. I placed the other half in another ruin to the right of the building where they could cover all three objectives. I actually sort of misplaced these units since I put the combat squad with both psycannons on the objective and not in the other ruin that had a better field of fire to all the objectives. Ultimately that wouldn't matter in the game but still something to remember for the future.

The Grand Master and Paladins hung out in the Landraider Redeemer behind a building on the right flank with the Interceptor squad snuggled behind them. They would be my spearhead to claim the right flank objective.

The Stormraven with the halberd Strikers I held in reserve to have them arrive and bolster my forces wherever they were needed most.

My plan was to hold two objectives ignoring or doing nothing more than a late game contest of the third in the middle of the table. I anticipated Casey taking the middle objective with a pack of Grey Hunters since it would put them in rapid fire range of my already held objective, effectively making their bolters just as potent as my storm bolters, and having a 2-1 advantage in firepower. In truth, I expected the entire central crater field to be crawling with Grey Hunters.  There was plenty of cover for them to hold the center and then bear down on at least one if not both of the objectives in buildings.   Casey, though, had other plans.

Deployment - Casey
Casey, I found out afterwards, was nervous about incurring multiple terrain checks for his Rhinos and instead decided to entirely avoid terrain and put everything on the flank with the objective straight across from my Paladins in their pimpin' Landraider.

Turn One
Casey was effectively hidden from my army, so first turn was pretty simple.  My Landraider trundled forward.  I was careful to only move it far enough forward that the speeders with multimeltas would only get a standard shot and not a fully charged melta shot.   The Interceptors bounced from behind the Landraider to behind the building where they would be safe for a turn.

Casey's bikes plowed forward leading the charge, followed by Rhinos and speeders.  The Rhino with the Wolf Priest emptied the Grey Hunters, anticipating the charge should the speeders get lucky.  True to range both speeders shot at the Landraider but without the extra dice they needed 6s to glance and did nothing.   Frustrated the Grey Hunters fired their meltagun, penetrating and blowing off one of the promethean flamer sponsons.

Turn Two
Stormraven failed its reserve roll but that was okay because I didn't really want it yet anyway.  The Landraider tank shocked the bikers out of the way so it could set up it's other promethean sponson along the tightly packed line of grey hunters.  The Interceptors hopped over to the Blood Claw Bikers prepared to assault.  The Paladins and Grand Master also trundled out prepare to smite the heretic mutant canine marines.  The psybolt Strikers decided to swap positions to get the psycannons in range of the action.

The twin-linked assault cannon on the Landraider made quick work of one of the speeders while the machine spirit brought promethean fire upon all 10 grey hunters -- killing 7.  The Paladins charged the remainder.  The Grandmaster only managed to sneak one wound in against the Wolf Priest.  The priest's talisman provided a 5+ ward vs psychic attacks, saving him from the force weapon's instant death.  The Paladins made short work of the remaining Grey Hunters (receiving two wounds in return) and also inflicted a wound upon the priest.  This time his talisman failed and he died to their forcified goodness.   The Paladins then consolidated back into their landraider.  A move I've since been informed is no longer legal.  Oh well,  Casey would utilize it as well in his turn, so no harm no foul.

The Interceptor squad charged the three bikes, activating Hammerhand to gain +1 Strength.   Initiatives were simultaneous and they managed to kill two bikers to one loss of their own.  The two demonhammers finished off the remaining biker.

On Casey's turn he instigated project Paladin Slayage -- deploying his remaining two Grey Hunter squads around the Landraider and hugging the remaining speeder up close.   Unfortunately for him the speeder rolled 2 to hit.  Followed up by the Wolf Lord's squad's meltagun rolling a 2 to hit.  Raging at the inability to pop the Landraider Ragnar's squad chose to charge the Interceptors.  The insane leader butchered the remaining four single-handed, giving him +4 Attacks for the next assault phase.   Yuck.   Ragnar's squad promptly consolidated into a nearby Rhino.

Turn Three
Stormraven enters.  I decided that Ragnar's had to die.  Preferably not in close combat because he was meaner than anything I had available.   To that end the Landraider tank shocked the Wolf Lord's squad out of the way.  Lining its remaining flamer to be able to target the ruins that the Grey Hunters would likely deploy in once their Rhino was popped.  To help shepard them in there the Stormraven disgorged it's Striker squad on the opposite side with Incinerators primed and ready.  Paladins came out as well, completing the circle of love.  The psybolt Strikers finished their redeployements.

The Landraider assault cannon blew up Ragnar's Rhino and they deployed into the ruins it had been parked against.  The promethean flamer continued its evil reign killing 8 Grey Hunters; massed stormbolter fire from the Strikers and Paladins killing the remainders and laying the great wolf low.   Deprived of its target the Stormraven's assault cannons lit up the landspeeder, blowing it from the sky.

The game going poorly, Casey launched his Grey Hunters into the Paladin Squad.  The Wolf Lord and Grand Master traded blows, but neither could get past the others' 3+ Invulnerable.  Meanwhile the Paladins and Grey Hunters fought -- the wolves killing the Paladins to a man, at the expense of only a few lives of their own.  Fearless, the Grand Master made his single armor save and prepared to fight on.

Turn Four
The Stormraven moved to take care of one of the remaining Rhinos, while the Landraider did the same for the other.  The end result led to the destruction of one and the immobilization and stormbolter destruction of the other.  Meanwhile the halberd Striker squad launched their assault into the remaining Grey Hunters.  Activating Hammerhand for the +1 Strength; they struck at their improved initiative thanks to their halberds, slaying all of the Grey Hunters.  This time in the battle of heroes the Grand Master's blade struck true and his force blade succeeded in killing the Wolf Lord outright.

End Game
The final outcome was a pretty decisive rout in favor of the Grey Knights.  To be honest though, I don't think it was a true telling of their ability.  Casey, had never played Space Wolves before, which was in evidence by his attempt to use the Grey Hunters solely as close combat hammers instead of utilizing their true strength of combined arms.   We discussed army lists a bunch and I imagine his next iteration of the wolves is going to be a much leaner, meaner, fighting machine.

He also really gave me the fight exactly as I wanted.  I got to fight each of his squads individually, on my terms, with either superior numbers or superior troops.  I remain confidant that, early in the game, if he had turned it into a fire fight supported by key assaults by Ragnar it would have been a much different game.

That said, I was surprised how much the new Grey Knights play exactly like the old ones.   I entered into the game expecting to be learning a new army but for the broad strokes they still function exactly the same way, only the details are different.  They still need to isolate components of the enemy's army and beat them piece by piece.  Getting drawn into any form of attrition is going to suck a lot.

The loss of a point of WS and True Grit (meaning the loss of +1A) hurts.  I'm going to have to more aggressively pursue the charge because getting charged severely reduces their combat effectiveness.  The addition of the Stormraven and basic troop transports is a godsend and will help.

I'm also going to have to futz around with configurations of nemesis weapons depending on the squads battlefield role.  I forsee a lot of arm swaps in my future.   Sadness.  Maybe I'll do some magnetizing ....

Antipsycher stuff is going to fuck Grey Knights up.  A lot of their coolness is predicated on them using a psychic power.  Shadows of the Warp and psychic hoods are going to blow.  Grey Knights fighting Grey Knights is also going to be brutal and silly.

I'm looking forward to getting some more games in and really stretching their legs a bit.  Hopefully I'll happen upon something from out of left field that is really surprising and fun.  In the meantime they're a nice change of pace from, uh, Spehss Mahreens!
at 10:34 AM