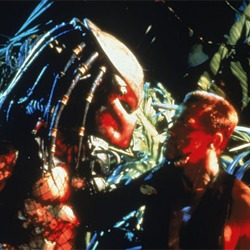 In a stunning turn of events it has been revealed that embattled former governor Arnold Schwarzenegger was waging a shadow war for the very survival of the planet.  Immediately upon taking office he was thrust into brutal conflict against the enigmatic race know as Predators who had infiltrated the highest levels of California government.

While many consider his tenure as governor borderline disastrous this new evidence reveals that he, in fact, saved every one of our lives.  Even more amazing is the knowledge that he was denied the use of a machine gun, machete, or even Swiss army knife while maintaining his position.  Fortunately Arnold comes naturally equipped with guns of his own which he readily used in service to State and Country.

Any further attempts to belittle or call him a "goob" will obviously be met with derision and scorn for the perpetrator, who would do better to keep his whore mouth shut.
at 1:21 PM