But I'm Not Having Fun 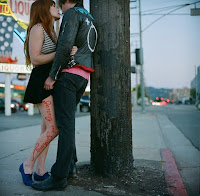 Okay, I'll come right out and say it.  I know jack shit about music.   When it comes to selecting my tunes I use the buddy system.  Anything my buddy Greg tells me to listen to.   Most the stuff  my buddy Jake tells me to.   Almost none of the stuff my buddy Tony tells me to.   Tony is a tragic case because he used to like good music and then he got hit by a bat or something and decided shit smelled nice and Mantic made cool elves.  It's been down hill since then.   That's another story entirely though.  I'm also a member of the Holy Church of the Beastie Boys.   Sacred is their name and hallowed is their music.   Why am I telling you all of this?  Well, because I'm about to review an album and I know jack shit about music.

Lets talk about Jenny Lewis.   Ever since I discovered Rilo Kiley some years back I've loved Jenny Lewis.  I know, I know, Rilo Kiley was/is a band and I should love all of them equally.  Lets face it, we all know why so many bands are a bunch of silly looking guys in skinny jeans and a smoking hot lead singer.  Jenny Lewis is great because she actually manages to have talent, sex, and quirk in a wonderful ratio.

All of Rilo Kiley's albums have been fun for me, each one getting better as they go.  I even liked the occassionally maligned as too "Pop", Under the Blacklight.  I thought it was fucking brilliant and Jenny can sing "shake your money maker" to me anytime she wants and I will happily oblige.   Jenny's last two albums were solo affairs with a bit of a Dylan narrative vibe that I dug.   Rabbit Fur Coat and its soulful folky sound beat out Acid Tongue's more aggressive notes for me. Of course, who's keeping score?  They were both awesome.

Finally we come to Jenny's new album which she made with her current beau Jonathan Rice, I'm Having Fun Now.   Damn, I was excited for this album and now having listened to it multiple times about all I can manage is -- it is good.   Maybe to the trained ear there is something super, fucking, stupendous going on.   All I got was a bunch of fantastic lyrics, sung very well, that elicited absolutely zero emotion from me whatsoever.

Several of the songs are weaker than others but that's just what happens in an industry that still insists on the increasingly outdated album model of delivery.  Others though (the obvious singles) border on great and I have moments where I get all hot and bothered with the anticipation that the duo is gonna knock me dead.  Sadly the knock-out punch never happens and the album goes on being nicely executed and not much else.   Sadness.

Email ThisBlogThis!Share to TwitterShare to FacebookShare to Pinterest
Labels: Music