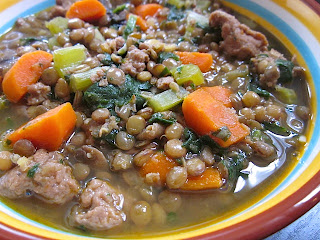 Well, I'm pretty much broke at the moment.   Which is not uncommon considering my cavalier spending habits.  One of the quickest ways to save myself a ton of money is my food budget.  Fortunately, one of my favorite food blogs happens to be the aptly named, Budget Bytes.  I've tried a handful of Beth's recipes over the months since I found her site and, in general, they've turned out quite nice.

We're starting to have cold nights here so I figured that it was time to break out some soup.   Soup tends to be super cheap and is one of my favorite categories of food anyway so I'm always eager to add an additional recipe to my repertoire.

I tried out her recipe for, Lentil & Sausage Stew and it turned out quite tasty.   For the most part I followed the recipe exactly, with my only change being that I used ground turkey instead of turkey Italian sausage.   The plain turkey was on sale and it was easy enough for me to season it to taste like the Italian sausage version.  I also added two extra cups of water about 2/3 of the way through since it was getting a bit dry as the lentils softened.

Like most soups it was super easy and made a ton.   Should save me a penny of two over buying lunch every day.  Yay, team.
at 12:26 PM